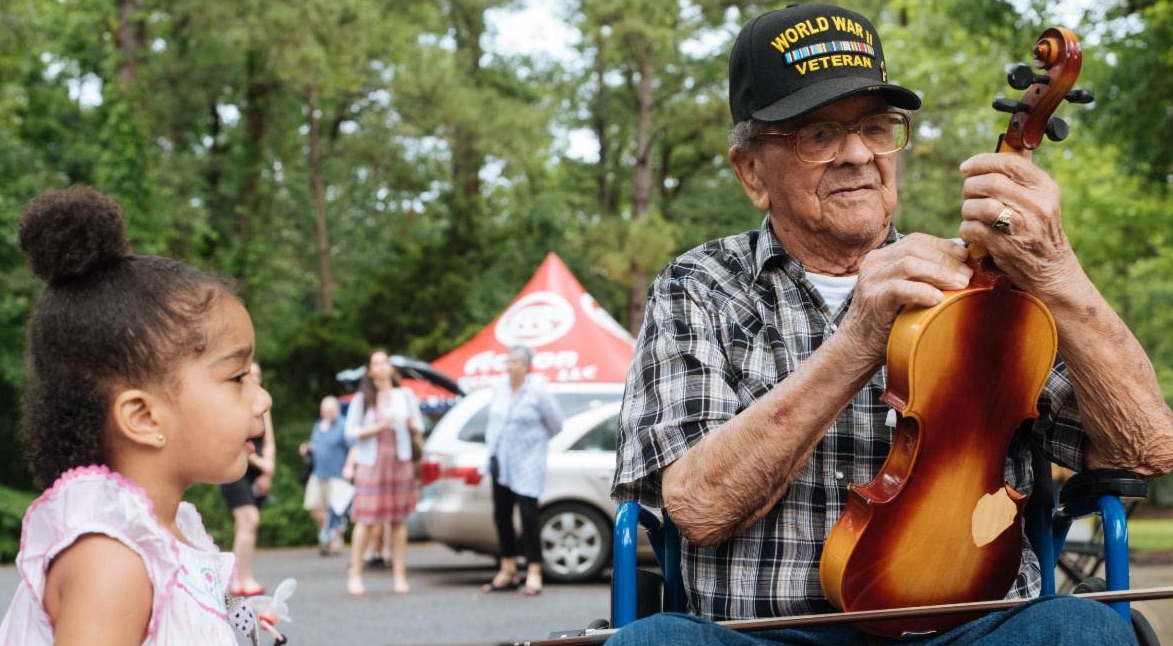 A new CD from New Electric Records, slated for release on June 19, captures an early 20th-century style of music drawn from the house dances of rural Acadiana by one of its last practitioners. Creole house dance features 101-year-old Creole fiddler Willie Durisseau (1918-2019) on two tracks, each featuring three short songs, some of which represent a pre-war Creole violin style from the early decades of the 20th century that ‘has never been recorded.

These performances were captured by Louis Michot on a Zoom stereo recorder at Maison Durisseau in the spring of 2019. Michot is a singer and fiddler of Lost Bayou Ramblers, a Grammy winner, and founder of New electric discs in Arnaudville, Louisiana. Creole house dance will be released both as a 45 rpm and 7 inch vinyl record and as a digital download via streaming platforms.

As Durisseau and his wife Irma recounted their memories of the Creole dances of the 1930s to Michot, Durisseau picked up his violin and let his fingers remember the songs he and his late brother, Jimmy Durisseau, played in their hometown of Lebeau, Louisiana. . In their community, the musicians performed exclusively on the violin and the guitar, without the accordion. Creole house dance offers 21st century music lovers a startling glimpse into these celebratory weekly events.

Louis wrote about his encounters with Durisseau for the Louisiana Folk Life Program:

â€œIn an age when we turn to recordings to give us insight into the roots of French Louisiana music, we sometimes overlook the deepest wells of information and experience in our own region – the elders who have played and attended the house balls. I was fortunate enough to be introduced to Willie and Irma Durisseau in 2019, who attended many house dances in their hometown of Lebeau, Louisiana throughout the 1930s. Willie was a Creole fiddler who played at the balls.

â€œWillie Durisseau was born on February 20, 1918 in Mallet and grew up in Lebeau, the two communities of the parish of Saint-Landry. His days as a Creole fiddler began in Lebeau, where he and his brother Jimmie made their first violins from cigar boxes. They played house dances in the 1930s and were usually joined by one or more of their cousins, the Joe brothers: Aaron, Caffery and Clarence. Of the two groups of brothers, they played the violin or the guitar, or both, but neither of them played the accordion, and according to Willie and Irma, they had never had an accordion at their house balls. in Lebeau.

â€œWillie eventually met Irma Doucet at one of these house dances, and the two were married in August 1940. Irma stated that they performed and attended house dances in 1938 and 1939, but that in 1940 much of the community moved to Beaumont, Texas, presumably for work. In the same year, Willie joined the United States Army and went to fight in Okinawa during World War II. Irma said that they did a few little house dances after the war, but these social gatherings quickly faded as the community wasn’t as strong as it was before the war, and Willie put down the fiddle to raise his family and work in the Willie and Irma then moved to Opelousas to raise their family, but the couple never gave up on their legacy and memories of the time in Lebeau.

â€œIn 2017, a family member bought a new violin from Mr. Durisseau, and at the age of 99 he took over the instrument to recall some of the melodies of these dances over 80 years ago. As one can hardly imagine still playing the violin at age 101, Willie was able to carry a tune for about a minute at a time, and only a few tunes in the span of an hour, but the clarity and authenticity of them. melodies flowed from his fingers like gold.

â€œI sat down with the Durisseaus for a series of informal talks in April and May 2019, with Corey Ledet, a Zydeco Creole accordion player, Robin Miller, a local Francophone and culture enthusiast, and JB Adams, an amateur of Creole music. and a radio DJ in Houston who was the first to discover that Willie had taken over the violin at the age of 100.

â€œWillie Durisseau’s music was like a precious time capsule buried in his mind for nearly a century. While many musicians modernize and change their repertoire as trends change, Willie clings to and accesses the music of his youth as a rare gem to share with his family, while Irma remembers of stories from older and simpler times. Mr. Durisseau’s ability to tap into those house ball evenings is what makes his music truly priceless.

â€œWillie’s passing on December 17, 2019 marked the end of an era. He was the last known surviving Creole house dance violin player in Louisiana.