A little girl joins street performers to do folk dance 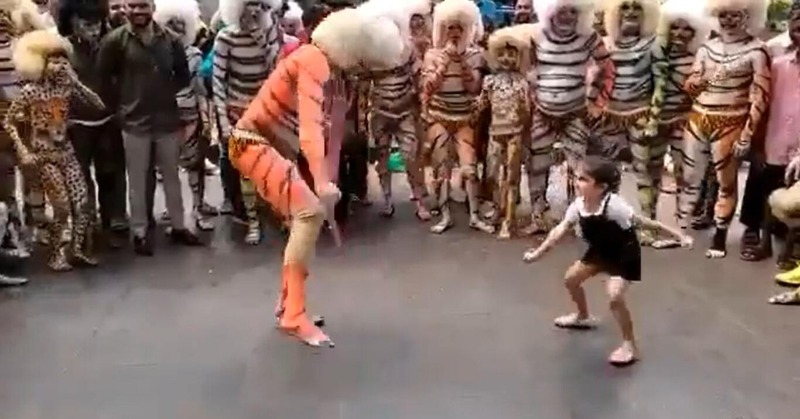 This young girl has the right idea: to dance as if no one was watching her.

A heartwarming video that has gone viral shows a street performer performing a folk dance in Udipi, Karnataka. What makes this video special is that a little girl joins the performer and steals the show.

In the now-viral video, a woman can be seen approaching a dancer with a little girl and honoring her performance by putting a garland on her. The dancer then encourages the girl to dance with him and she soon gets into the groove and is swinging high and stomping her feet, matching the folk dancer’s moves perfectly.

The clip was posted on Twitter by tourist page Visit Udupi (@VisitUdupi). “OMG! that’s super cute,” the video is captioned.

The video garnered over 5,000 views and tons of comments.

Look at the baby energy 😍

The girl is a superstar ❤️❤️

Earlier, a video went viral showing a young girl joining a drag artist during a performance at a metro station in Hyderabad. What makes it encouraging is that the young child joins the performer without any skepticism and dances with the artist.

The drag performer is seen donning a bright orange sari and the young girl dancing next to the performer looks like a college student with a backpack. A large crowd surrounds the performer and enjoys the performance.

People can be seen recording the drag performer dancing with the kid, and it looks like everyone is having a great time there.

The video was shared on Instagram by the drag performer with the caption: “And then they ban kids from drag shows and say we scare the kids. But then the kids just love it drag queens. I’m glad I’m not limited to do it in a club scene. I walk the streets. It was an event in a subway station! A subway station where the public was from everywhere like Drag Busking rocks…”

In another viral video, a group of African children were seen dancing to the famous song ‘Gallan Goodiyaan‘.

The clip was shared on Instagram by a page, Masaka Kids Africana, which is an NGO.

In the video, three children can be seen shaking a leg to the catchy song. A few other children, who don’t want to be left behind, can be seen replicating their steps in the back. The atmosphere and the energy of the children are contagious.

Gallan Goodiyaan is a song from the 2015 film Dil Dhadakne Do. It is depicted on Priyanka Chopra, Ranveer Singh, Anil Kapoor, Shefali Shah, and Farhan Akhtar, among others.