Byron Aihara of dance, music and ritual in Manipur – The Sangai Express 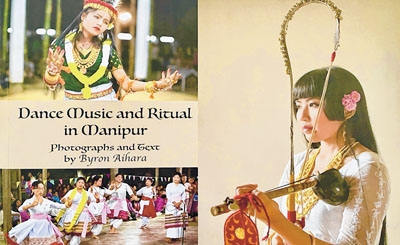 Byron Aihara, before his story comes, let’s give some brief information about our Sanaleibak Manipur. There were people from outside India who came to Manipur and wrote books about this land in the nearby northeast corner of Myan-mar or should I say in a more dramatic style of the BBC, Burma.
Anthropologists came and wrote about Manipur, like Thomas Callan Hodson whose book “The Meitheis” is remarkable. Louise Lightfoot the Australian dancer wrote the magnificent book “Dance-Rituals of Manipur”. It is true that this small land gives an aura to anyone who comes to write about it, praise its beauty and even mourn it. Nevertheless, there is more to explore and show the world. Now, an American-Japanese from California has ventured to India and ended up discovering the rich, exotic and vibrant culture of Manipur. This person is none other than Byron Aihara who does not claim to be an anthropologist, but his work is indeed very anthropological.
Byron came without university or government funding, or on a mission from a private institution, but it was his curiosity and desire to learn more about music, dance and rituals that led him to Manipur. He was warmly welcomed at Imphal and little by little he started his adventure to explore the majestic cultural treasures of Manipur. He has participated in numerous events and gatherings of dancers, musicians and performers. Lai Haraoba (Merry making with the Deities) was introduced to him, he was able to see the Ras Leela at the Shree Shree Govindajee temple, and as part of his stay in Manipur, he also experienced the socio-political turmoil of Manipur. He conquered the environment and moved peacefully from Kakwa to Phayeng and Kakching and many places on his bicycle. One interesting thing about him is that he has gotten quite used to eating his food with his hand. He took a large number of photographs, videos and audio recordings of various ceremonies, rituals and events that took place during his stay.
Lai Haraoba’s magnificent dances and music from Kanglei, Chakpa, Moirang and Kakching had Byron running here and there taking pictures continuously until midnight and beyond. The Gopees’ devotion to Radha Govinda was indeed a moment to be cherished. The songs sung by the Laihui Ensemble artists and the dances by the JNMDA artists are worth mentioning. Various ceremonies of the Meiteis such as marriage, death and birth were perfectly recorded. Gaan Ngai dances, Tangkhul songs, Thang-ta martial art form, Wari Leeba and other social events were some of Byron’s experiences. It is not just a single person from anywhere across the world who will come and do such a huge job for us Manipuris. It was indeed a divine-human sent to Manipur as an old sage from Andro said.
Byron, in search of his own lost ancestors, danced in front of the shrine and the deities of the forest gods Meitei and Chakpa who naturally came to him. In doing so, he felt a deep connection to his own past, wanting to pay homage to his own lost and forgotten ancestors. Those who believe in God can take seriously what is going to be said below and those who don’t believe in the divine creator can simply ignore it. Byron came to the shrine to bow in reverence to the deity Koubru and he knelt down and promised that he would do all he could to his best with his Manipur collections for the good of all. During this short period of connecting his soul to the divine Koubru, he heard a voice saying, “Just be a good person”. In the end, Byron Aihara finally published his precious book for Manipuris and all who would like to know more about Manipur. The book is priceless and a fine collection of photographs with detailed descriptions.
The book is called “Dance Music and Ritual in Manipur”.