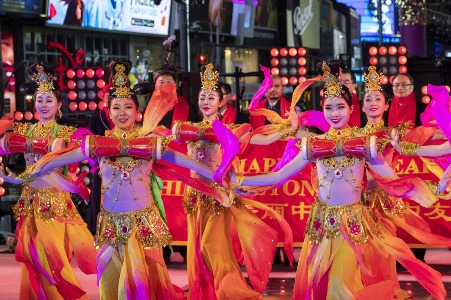 A Chinese folk dance stunned thousands of people in Times Square in New York (NYC) on Tuesday night as it kicked off one of the world’s most famous New Year’s countdowns.

Co-hosted by the Sino-American Friendship Association and the Times Square Alliance, the show featured more than a dozen dancers dressed as figures from Dunhuang murals in the Mogao Caves, a UNESCO World Heritage Site. UNESCO in Gansu Province, northwest China.

The 6-minute show demonstrated the beauty of China along the ancient Silk Road, as well as the passion and hospitality of the Chinese people.

Video on various LED screens at the top of the square showed China’s landscape, such as Huangshan Mountain, also known as Yellow Mountain, in east China’s Anhui Province.

The dance was followed by an array of performances by artists and pop stars from around the world.

Chinese Consul General in New York Huang Ping, who made brief remarks ahead of the show, wished everyone a Happy New Year in English and Chinese.

The multi-hour celebration, which culminated with the 60-second countdown to the New Year and the confetti-filled festivities that followed, drew an estimated 1 million revelers to the heart of the city each year.

Some people have waited over 12 hours for a good spot to witness the falling ball, a New Years Eve tradition here since 1907.