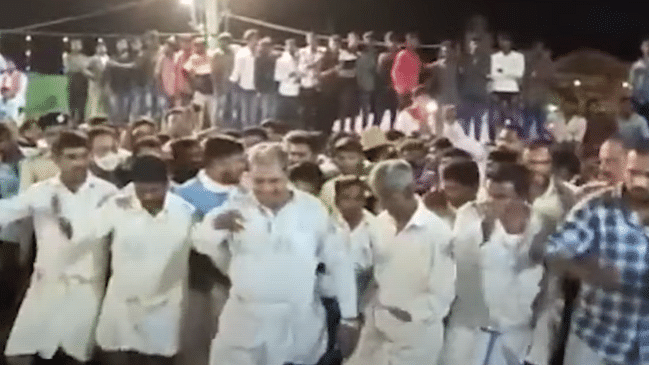 Bengaluru: A temple festival in Mysuru saw a special performance on Thursday as Congress leader and former chief minister of Karnataka Siddaramaiah performed the Veera Kunitha – a form of folk dance – with a troupe from his home village of Siddaramanahundi.

Raising his hands in the air with a rhythmic movement of his feet, Siddaramaiah, 73, led the dance troupe while singing the praises of Siddarameshwara – the divinity of the temple. The party leader of the Congressional Legislature was named after the temple deity and had received formal training in the art form as a child.

A video of the performance was shared by his son and congressman from Varuna, Yathindra Siddaramaiah.

“The Siddarameshwara temple festival is held once every three years, but it has not been held for six years due to temple construction and Covid. Finally, the festivities began Thursday midnight. Father danced with our village troupe after being invited by their friends and fans,” Yathindra told The Print.

This isn’t the first time Siddaramaiah has shown off her dance moves. During the Congress party ‘Bellary halo‘ padayatra in 2010 against illegal mining in Karnataka, Siddaramaiah made headlines with his energetic performance of the Veeragase – another form of folk dance originating in the state. The padayatra eventually laid the groundwork for his elevation to chief minister in 2013.

“Father was sent to the temple to learn Veera Kunitha when he was a child. In fact, he learned his alphabets from his dance teacher in the temple. His formal schooling started later, only after his direct admission to Class 5,” Yathindra said.