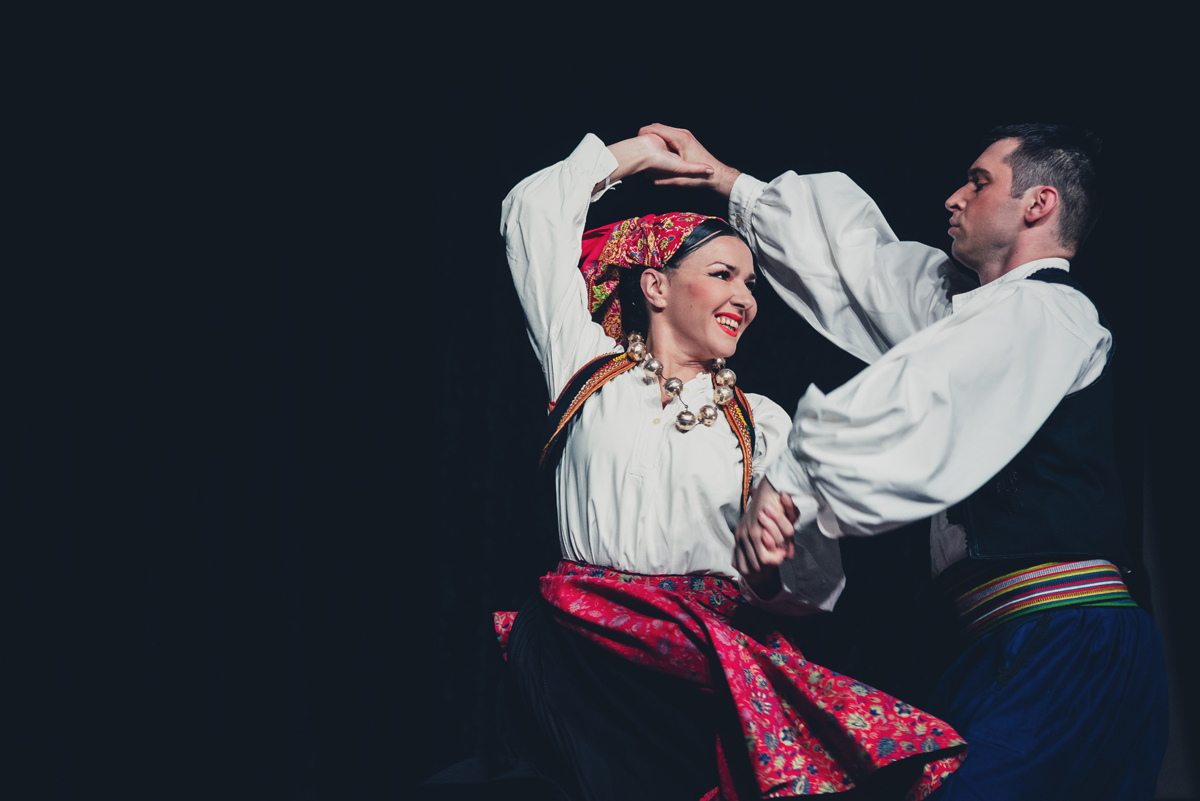 When dancers from the professional Slovak folk art ensemble Sl’uk took to the stage at the Croatian National Theater in Zagreb last September, not everyone comfortably seated could have known what to expect. Known for their acrobatic and zealous performances, Slovaks have circled in the air, mirroring the celebratory movements practiced by their ancestors at happy social gatherings of old.

Such a wild and physical spectacle contrasted starkly with the immaculate, subtly performed ballet and grandiloquent opera usually found on this largest of Croatian stages. It was also in contrast to their partners on the evening, LADO, the Croatian National Folk Dance Association, whose own introduction on stage saw them slowly imitating the toil of agricultural workers accompanied by heartfelt singing with multiple harmonies. Comparatively, it wasn’t the most explosive or dramatic entry to have taken place on this stage. But that is not the goal of LADO. When the members of LADO take the stage, they are not the supernatural figures of the ballet or the overworked characters of the opera. They are you. They are us. These are the Croatian people and their ancestors, their performances offering an honest glimpse into the everyday life, festivities and diverse and enduring traditions of past centuries.

The dance style on display that September evening was not the only aspect that separated Croatian LADO from its Slovak counterparts. Of all the national folklore ensembles in Europe, LADO is quite unique; their ranks contain 42 members who are not only very experienced dancers, they are also all singers. In addition, the ensemble has 14 musicians who play together over 80 different traditional and classical instruments. These instruments, many of which are rare and archaic, reflect the richness of the different music and musical influences that exist regionally throughout Croatia. Like the folk dances themselves, each of these distinct musical streams has been brought together and carefully narrated by folklorists and other academics who have worked with LADO throughout its 70 years. Scouring the country in search of traditions, lest they be lost in the mists of time, LADO’s partners have also amassed a vast collection of original and authentic folk costumes which are used during performances. Archived and some repaired at LADO’s headquarters in Zagreb, these costumes now form a collection of over 1200 with many of them older than anyone still alive.

Ruled by foreign monarchies and empires for most of its past, today we know much of Croatian history thanks to a multitude of documents and other material evidence that emanate from these rulers and those who immediately surround them. The courts of kings and empires were always served by people gifted with the ability to communicate in writing. But, such gifts were far from universal in the Europe of yesteryear. Folklore, like Roma culture, has been largely preserved thanks to oral tradition, passed down from generation to generation via arguably sometimes berated complaints from impatient grandparents or neighbors. Compared to other evidence, Croatian folklore is a story devoid of flattery and hypocritical remembrance. Rather, it is an honest story, a story of the people and an authentically Croatian story.

Such is the importance of this voice in Croatian culture that LADO has always been chosen to represent the country on the world stage. Receiving the highest cultural accolades in its country, LADO has presented its award-winning presentations on stages as far away as Tokyo, Moscow, New York and all European capitals. In 2020, when Croatia marked the start of its first Presidency of the Council of the European Union, it was LADO that it turned to for the official cultural event to mark the occasion. Fields and village festivals of yesteryear, it is LADO and Croatian folklore that now represent the country in the current courts of international leaders and dignitaries. Thanks to LADO and its 70 years of dedication, the history of a people, a Croatian history, is finally prized above all the others in the cultural expression of the country.

You can attend a special collaboration between LADO and the Croatian Radio and Television Jazz Orchestra at the Lisinski Concert Hall in Zagreb on May 2, although this show is subject to a postponement. Before that, to mark World Dance Day, the documentary film 70 will be broadcast today (Wednesday 29 April) on Croatian TV channel HRT3, from 18:55. 70 offers an unprecedented glimpse into the lives of performers, on and off the stage, with particular emphasis on three stories: that of Dubravko RadiÄ‡, Petra MatutinoviÄ‡ and Mladen Kosovac. Viewers will be able to get closer to the individual members of LADO while seeing the spirit of the collective unfold. They will also be able to see the final and dazzling results as LADO takes the stage, a performance that is the culmination of the members’ efforts and all the exhaustive background preparations. You can whook up a trailer for the documentary below, and keep an eye out for a version of the documentary with English subtitles, which will be hosted on Time Out Croatia later this year.