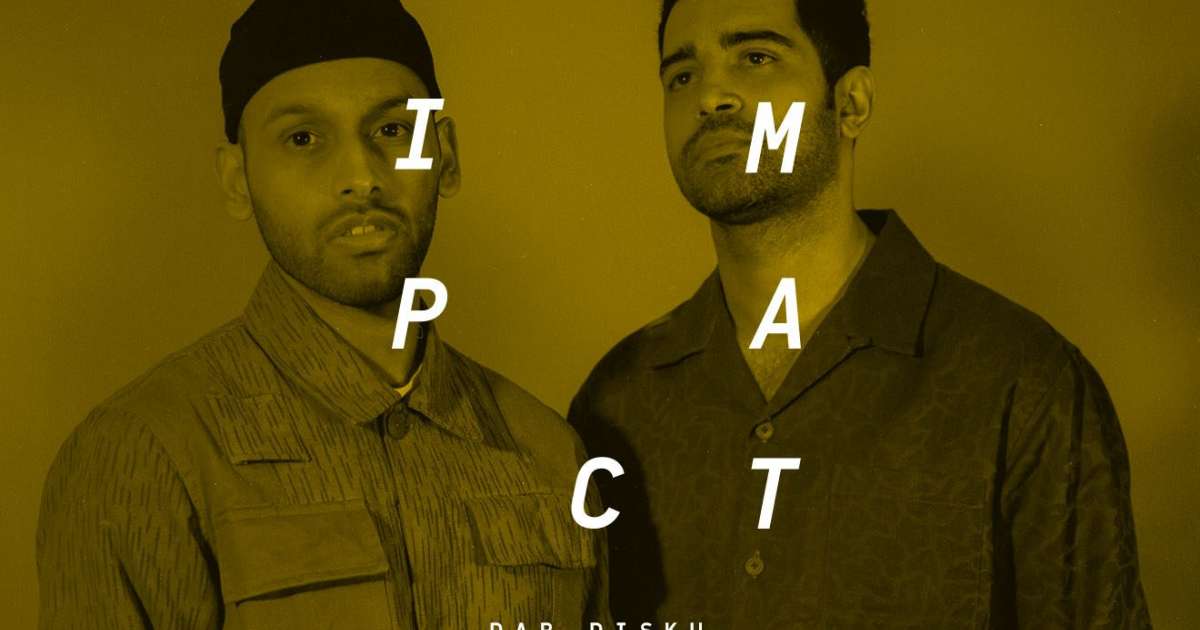 As a label, you publish editions or reinterpretations of old Middle Eastern and Arabic tunes. What’s your process for picking up a song, dissecting it, and moving it around?

Mazen: Well, something about it has to stand out. Sometimes it’s the whole song, sometimes it can just be a little bit, where I just want to keep playing it over and over. In those cases, we use it more as a sample and then work around that, seeing what kinds of sounds move it forward. We never want to mask or stifle the original tracks or samples that we use. We want to do things for them that will make them shine, to frame them, in a way.

With other songs that we have worked with, sometimes we come across songs that only require a minimum of work and it’s the technical process of just cleaning them up and making them more suitable to be played on highs. – massive speakers in a large room. It might just be a matter of adding a little bit of that kick and snare that is right under a track. Sometimes it’s a bit more elaborate work when you take something that has a nice melody but sounds very traditional and you want to turn it into something that is a bit more dance-appropriate. In those cases it’s been hard work but the most rewarding because what we’ve done is go back and listen to songs that came out around the same time, a few years more or less when it came out. , and I thought about the instruments they were using, what kind of synths or drum machines they were using. What kind of recording setup did they have, did they track their bass sounds on a bass synth, or did they use a live bass? Were there guitars in the background? Do we have live percussionists and tambourines? That kind of stuff. And all of this is happening in this track. We want it to sound almost like the original artist did this track, not us. But there is no one-size-fits-all approach: each is a challenge and some may take longer than others to understand and succeed.

Read next: How Jessika Khazrik prepares the future with techno

I have noticed that there seems to be a broader pattern of reinterpreting Middle Eastern, Arabic, and Asian sounds in recent years, especially in downtempo and chuggy music. Why do you think it is?

Mazen: From a sound point of view, I think it works very well. There are these high lines that you get: in Turkish music it is sometimes played on a saz, or in Arabic music on an oud, or in Persian music, it is a santur. First of all, these are beautiful sounds. But at the same time, it’s sort of plucked string instruments that are played incredibly rhythmically. Some of them are very bouncy and have this kind of galloping rhythms; when you pair that with some kind of chuggy bass layer, if you allow it, you get that kind of otherworldly but hypnotic sound. It’s just the perfect match, really.

Vish: I also think that in many ways the kind of new beat-y chuggy sound that Arabic music is typically edited in is very abstract compared to the original format. It’s not supposed to sound like that and anytime you have that kind of space on a dance floor or behind the decks, when you’re mixing two tracks together, you tell yourself it shouldn’t work, but that walk.

Mazen: In a way, you want this to happen. You want to transport whoever is listening from point A to point B. You might not know where point B is in the process, but you want to transport people. So when you take those sounds and put them somewhere where they shouldn’t fit but they really do, you’ve just taken someone to a whole different place.

Vish: This is my favorite moment when you’re a DJ: having unexpected tracks that come together.

Much of this reinterpretation comes from producers who are not from Middle Eastern, Arab or Asian countries. How do you feel about this?

Mazen: It depends a lot on the situation, I think.

Vish: Yes, it is very subjective. Because the white guy from Europe maybe gives him more respect than we do, I’m not saying it happens ha, but it is possible. There are white DJs who have a really bad reputation for what they do but in fact deep down they have a very respectful and calculated approach to re-publishing and editing or releasing Middle Eastern music.

But it can also be quite the opposite, with people being absolute assholes about it all, not crediting the original artist or even bothering to try to get a license. Also, using totally ridiculous works of art, like completely orientalist and exaggerated magic carpets or snake charmers, belly dancers, etc. Again, personally I don’t think there is anything wrong with this, but it depends on who does it and in what context. I mean, every Lebanese record had a belly dancer on it – every Ziad Rahbanme and Elias Rahbani. But that’s because the record was made for belly dancing. There are Arabic records with magic carpets, lamps and geniuses on them, but that’s because they’re based on folkloreâ€” Ali Baba and the Forty Thieves, which is a popular folk record throughout the Middle East. It’s all a matter of context.

You mentioned people approaching any â€œnon-westernâ€ music with an orientalist lens, can you tell me a little more about that?

Mazen: We talked a lot about Orientalism, with other musicians and producers but also between us. We got into heated discussions because there are no easy answers â€” and that’s not necessarily a bad thing. This is something that needs to be considered on a case-by-case basis as the idea of â€‹â€‹Orientalism is almost as if the intention behind it determines whether he is Orientalist or not. Of course, its execution too, but if the intention is to portray a group of people – their art, their music, their culture – as being “other”, from a being from another world to a being different from the standard in a sub-human way, that for us is quite damaging and toxic. But in some cases, through folklore and old stories and works of art, Orientalism has only served to stimulate the imagination, to create stories and mystique; it was pretty benign and not malicious at all.

To read next: In session: ZULI

Have you noticed any changes in the industry since you started?

Vish: I think people are more aware of where it’s coming from now and they don’t just lump it into one thing. People are a little more aware of the story, because Arabic music is such a broad term. It’s like I’m saying ‘British music’, there is so much behind it. You can’t just say â€œArabic musicâ€ because there are so many different types, subgenres, and stories behind each subgenre. This is in some ways why we exist, it’s not a â€œlet’s teach you what arab music isâ€ but more of a â€œhey, look at thisâ€. We do it through a lot of things, whether it’s our radio show, our Spotify playlists, our mixes. I always try to make a conscious effort to try to shed light on the origin of this music.

You have started your return to live with your Boiler room party last month, how did it go?

Vish: It was the best show of my life. I’m pretty sure Maz had the same feeling.

Vish: I’ve never played in front of 3,500 people before. I cried halfway through because I saw other people cry. We’ve played music that we’ve been playing since the very beginning of Dar Disku along with new music that we found. Our best friends were in the crowd and there were times when each person’s hands were in the air. We’re very pessimistic as a duo, we’re always like â€œnahhh, I don’t know if this is going to work. It’s just a complete dystopian view of the world: everything sucks, we’re all going to die, this music won’t work, haha. But at that point, we felt like everything was amazing. And we’ve been pretty much non-stop since that show, playing loads of shows like Liverpool earlier this month with Young Marco, who’s one of my heroes. It’s just like we’ve never really left, but in many ways it’s so refreshing.

Read next: Muqata’a turns the sound of war into protest music

Vish, you said you collect new tracks all the time, but have either of you explored new sonic territory in the past year?

Vish: Oh yes. It sounds terrible, but I’m really into very mainstream pop. I’m obsessed with Caroline Polachek, Charli XCX’s new record, and I really like Ariana Grande. Whoever reads this article is probably going to tear me up for it, but trust me. These people are successful because obviously, yes, they’re a picture, they’re artists, but the songwriting is really smart. If you can get 4 billion people playing your song, you’ve got to do something right.

I think everyone is too high on horseback, especially within our industry – the whole digger scene of “I have this record that no one has ever heard before and therefore I’m the best DJ in the world. whole.” But if I see a DJ playing like 20 of these tracks and then dropping an Ariana Grande track in a set, it’s a lot more impressive to me than hearing two hours of noise, terrible tears of records. Fuck that! I just want to be surprised and feel good. We also explored the territory of the curve, finding old tracks or samples of hip hop tracks that I really like. What else? Lots of trance, lots of Goan trance, home electronics stuff.

Mazen: For me, the real ’90s â€” early drum’ n ‘bass, tangy stuff. While producing stuff, I started to really immerse myself in that kind of acid-type house sounds, synthesizers and drum machines. I really wanted to understand where it all came from, to go back.

No Ariana Grande for you too then?

Vish: Dude, he loves it. He love this! Also, big up Doja Cat, she is amazing. I think in this whole sphere, female rap music is going through an incredible movement right now. We’re not going to appreciate what happens until about five years later, I think it’s crazy. Megan Thee Stallion, Cardi, Doja, Kali Uchisâ€¦ there is so much good music out there right now that I think it doesn’t have enough credit. Everyone’s too busy jerking off with Drake, or whatever.

Can you tell me about your Impact mix?

Vish: It’s like an hour in a DJ Dar Disku set. It’s eclectic, there are a lot of friends and family things, there are high energy moments, there are weirder moments. It pays homage to the genre of non-electronic sounds of earlier Moroccan and Algerian music, right down to the editions of some Libyan stuff. It ends with a few radiators, some absolutely spicy. It’s a mezze platter, it’s the mix!