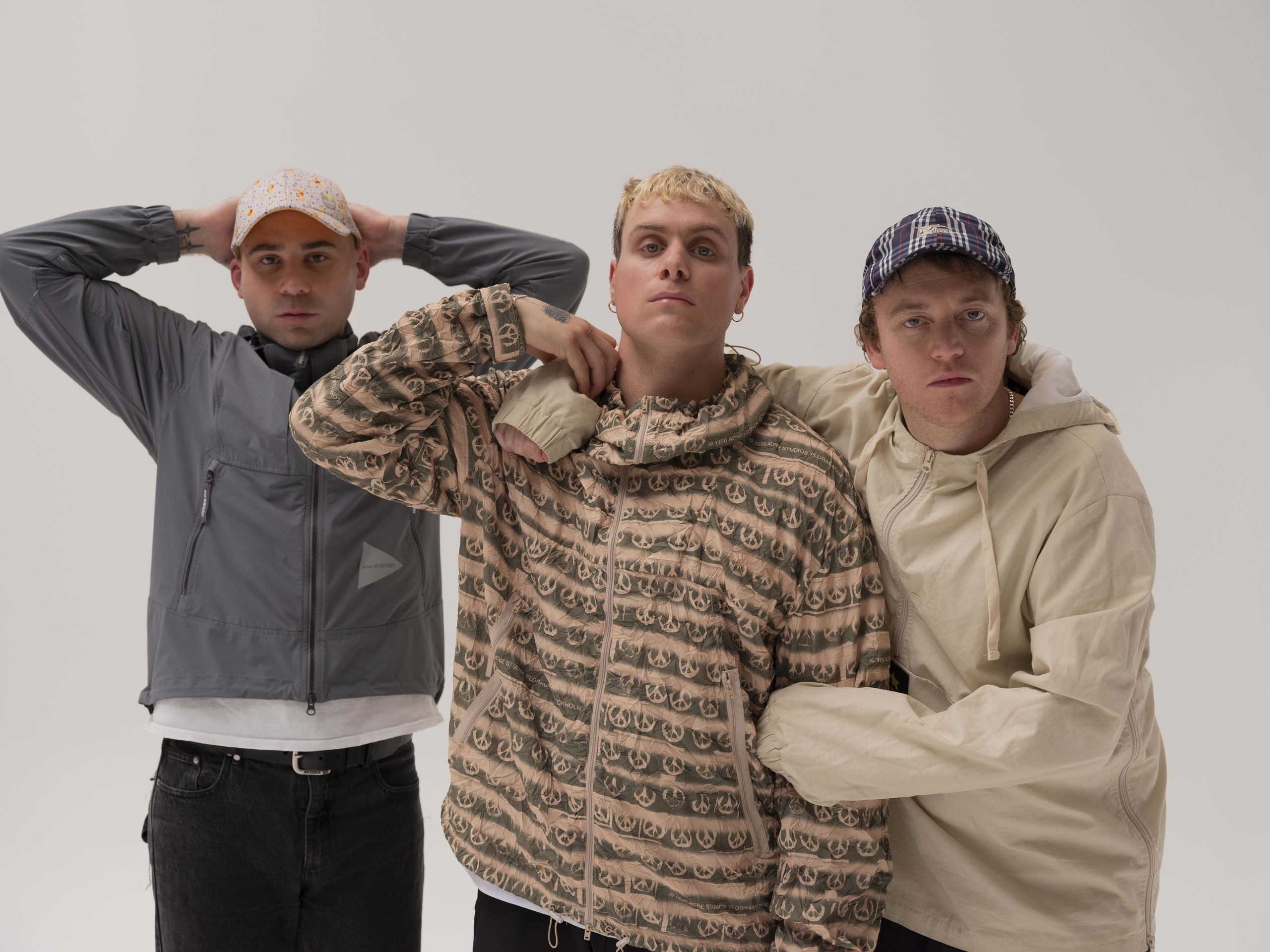 The Aussie trio are gearing up for their ambitious fourth feature, “How Many Dreams?”.

Once primarily known for their indie-slash-Britpop sound, DMA’S began experimenting with dance and pop production on “THE GLOW” in 2020, a heart-pounding record full of as much bouncy energy as it does emotional vocal moments. With their just-announced fourth album, “How Many Dreams?”, the band takes their style further than ever.

Taking a tonal break before immersing listeners in the depths, the four-track EP “I Love You Unconditionally, Sure Am Going To Miss You” arrived last summer as a way to transition fans between records. After the surprising scale of ‘THE GLOW’, its most vulnerable songs – ‘Junk Truck Head Fuck’ being a solid example – leaned towards the original sound of DMA.

“We have a love for rock and roll music, and we never want to leave that behind,” says frontman Tommy O’Dell. “You can’t do that with every album, though. This EP came from a bunch of songs that we wanted to record in a more DIY style. It gave us more room to be experimental on the new album.

“Those five tracks just seemed to fit together,” adds guitarist Johnny Took. “We went back to where we recorded our first album, Hills End, and self-produced it alongside the same engineer. We just had fun and went for it. If we wanted to dip things in with delay and fuzz , we wouldn’t be held back. We love this type of music and we always will.

“We have a love for rock and roll music, and we never want to leave that behind. You can’t do that with every album, though.

Although this indie-rock style has an everlasting appeal, the trio is able to explore so much more. Through various side projects and a series of collaborative co-writing sessions, DMAs develop their own identity and learn something new every step of the way.

“It doesn’t matter if it’s a younger artist who’s just hit the scene or someone who’s been around a bit longer, every time we do a co-write, we’re picking up something that we didn’t. hadn’t realized before,” Johnny shares, while Tommy reflects that “everyone has their own way of working. We were working with Nick Littlemore, and he was throwing out idea after idea on a piece of music that was only 30 seconds long. It’s something we started doing more of after seeing his style of work. It’s the coolest thing about working with other people. “

He goes on to explain that Johnny, Tommy and lead guitarist Matt Mason still learn a lot from each other and exchange ideas within their own band. Incorporating new ideas into their process, previous single “I Don’t Need To Hide” is a powerful package that shows how they fuse different facets of inspiration into a new trajectory.

The song has already found its way into live setlists, making an impression at the Reading & Leeds festival earlier this year when their hit ‘Step Up The Morphine’ was dropped in favor of their current advances. Combining rattling drumming and smooth guitar lines, Tommy shares that it came surprisingly easy during rehearsals and gives a good idea of ​​what to expect next. “It’s a perfect indication of the album to follow,” he says. “A mix of our love for pop, dance and rock and roll. This is one of the reasons why we wanted to publish it first. It’s an introduction to where we want to go.

It’s a vibe that the latest track “Everybody’s Saying Thursday’s The Weekend” continues. Bright and bubbling with that dance-tinged pop energy, it’s a universally relatable statement presented with broad horizons. “We’ve all thought it, we’ve all felt it,” Johnny offers of a song “about letting go of the things that weigh us down and embracing the future with a sense of optimism.” . It is precisely the positivity and reassuring confidence that they convey.

DMA’S has already built up a formidable bank of demos to draw from, allowing producers to fashion records from this roster and giving them significant control over the direction of the band’s production. Now, however, they are taking matters into their own hands. “As we got older, we grew more confident in what we put out as a band,” Tommy recalled. “It always helps to have a producer who is passionate about your tracks, and there are always songs we like that won’t fit, but this release was more driven by us as a band.”

Curiously, this process ended up being more sprawling and collaborative than ever, as the Australian company brought in three separate producers to help bring its vision to fruition. “We ended up working with Stuart Price, Rich Costey and Konstantin Kersting – three people with a lot of brains,” says Johnny. “An Englishman, an American and a German-Australian. We followed up in London, but then Omicron broke. In Sydney, we were then able to take a little more time with it. It’s not an experience you could do twice just because it was so chaotic, but the fact that we went in and recorded most of the album as a band in a room together and then more later we have it ‘Screamadelica’…I’d love to do it again.”

It’s this combination of live recording and studio editing that results in ‘How Many Dreams?’ its distinctive howl. The extra investment to cut things, swap sections, stack synth layers and change lyrics was a clear mission on this record. “There’s a lot more detail in this album,” says Tommy. “Where we once would have just had one melody, we’ve layered a lot more sections together, but they’re very clear and thoughtful rather than just going for a wall of sound for a wall of sound. We wanted to make that’s because it makes things a little bit harder. It’s easier to throw a million guitars on a track; it’s harder to have one guitar that sounds really good.

Challenging themselves was another central focus of DMA’s fourth album. After bragging with their memorable debut album, recreating that was never on the cards, no matter how many fans he may have amassed. “If they stopped and thought about it a little longer, they would realize that your favorite bands become your favorite bands because you love growing up with them,” Johnny points out. “When you build a relationship with your fans, it’s because they’ve grown with you as your sound has changed, and that’s really important. Stuart Price once told us: I know we’re moving on to different genres here, but even if you tried, you couldn’t not sound like DMAS.

Tommy, Johnny and Matt’s DNA is firmly embedded in every challenge they take on, and Johnny is willing to share a few specific moments that push that claim to its limits: “‘De Carle’ is pretty much our first 100 % dance. It’s probably my favorite song on the album. Maybe there’s a subtle guitar on it. There was a shorter, commercialized version of this before we realized, ‘what the fuck are we doing? It’s a dance song. If we’re making dance music, let’s do it right.

Despite the album vying for their shortest to date, this refusal to condense their spirit is a recurring practice. “‘Fading Like A Picture’ opens with a big guitar riff,” he continues. “On pop records these days, they’re always trying to squeeze a song into three minutes and make it as concise as possible. Instead, we thought – you know what? This is rock and roll.

DMA’s new album “How Many Dreams?” was released on March 31, 2023. Their new track ‘Everybody’s Saying Thursday’s The Weekend’ is out now.