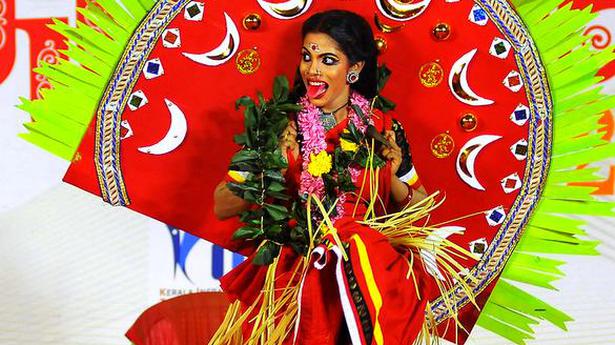 Long before the curtain rose for the folk dance competition on the Aingoth Pitch on Sunday morning, TT Rasna had secured a spot in one of the front rows. She wanted to watch the HSS girls play from a point of view.

Like Rasna, who belongs to Kasaragod district and a former candidate for district festivals, thousands of people had come early enough. Because, they knew that it would be almost impossible to get a place in a place where folk dance was welcome.

The massive crowd was also treated to a great performance.

A wide variety of themes were presented by the girls in attractive and varied costumes.

Besides the social issues, there were choreographies based on Odiyan and Theyyam (which is hardly surprising since it is the land of ritual art) at the festival this year.

The audience seemed to appreciate the variety. As for the dancers, they loved performing in front of such a large crowd.

â€œThis is the best crowd in my four years of school festival experience,â€ said Mr. Swathika of GGVHSS, Feroke, Kozhikode.

“I was touched by the love and encouragement from the people here.”

Her fellow competitor, Aleena K. Sabu, of the St. Augustine GHSS, Kothamangalam (Ernakulam), also enjoyed performing in front of such a large crowd. â€œIt’s a dream come true for me,â€ she said.

“I haven’t graduated from the district in previous years and this was my last chance, as I study in class 12.”

A little later, she was delighted to learn that she, like most of the competitors, had obtained an “A” grade.