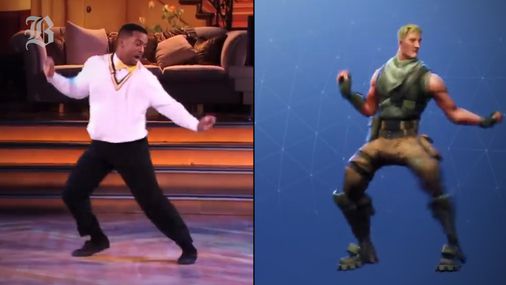 Another actor, “Scrubs” star Donald Faison, has not taken legal action. But he publicly accused the creators of stealing his unforgettable “Poison” routine.

“If you want to see it,” he told fans at the Vulture Festival last month, “you can play ‘Fortnite’, because they took that [expletive]! “

Is it that easy?

“Fortnite” is free, but they do sell upgrades. Among them: “emotes” or dances, which players can purchase so that their avatars can perform victory moves when they win a fight. Some are free. Others cost between $ 2 and $ 10.

According to Nielsen’s SuperData, the game has grossed over $ 1 billion since October 2017.

But enjoying the creativity of others is not dancing. And when most of those creatives are black, it plays into a systemic story of appropriation and exploitation.

Breai Mason-Campbell, activist and founder of the Guardian Dance Company in Baltimore, works to preserve and transmit African-American dance culture.

“Dance is our memory. Dance is our freedom, our power, our dignity, our opportunity to be celebrated for who we are and to celebrate who we are. Sometimes it seems like it’s the only thing we have, and to be robbed that only implies that we are not accepted as equals. “

“Fortnite” doesn’t just use popular dances. It is a culture vulture that makes free food from black bodies.

Fortnite should put the rap songs behind the dances that make as much money as the Emotes. Black creatives created and popularized these dances but never monetized them. Imagine that the money that people spend on these Emotes is shared with the artists who created them

“African-American culture has been continually plundered with little or no recognition or compensation,” says Jonathan Square, writer and historian at Harvard University.

“I think it could be argued that there are other ‘Fortnite’ dances that have been borrowed from people who are not black. But the appropriation and mockery of black dance and other forms of expression has a long history dating back to Jim Crow’s minstrel. Many children will see these dances and attribute them to the programmers of “Fortnite” without realizing that its origins lie in the ingenuity of black creatives.

Like Ribeiro, who filed a lawsuit against Epic Games on Monday. “Fortnite” offers a “Fresh” emote for 800 v-bucks (around $ 8). But anyone who has seen “The Fresh Prince of Bel-Air” will know him as “The Carlton,” an iconic combo designed by Ribeiro, who played Carlton Banks.

I wanna sing Carlton’s favorite song, “It’s Not Unusual” by Tom Jones, just watching. And that’s the beauty of dancing. In my family and in the black community, dancing is as much a part of our communication as speaking.

It is a language of love that expresses love for self, love for others and love for the music we move towards. It is a celebration. We create routines for birthdays, gym jams, weddings and barbecues.

We see it in the touchdown dances of the NFL, in the intrinsic influence we give in to when things are going right these days.

That way, it makes sense that “Fortnite” wants to add “emoticons” to its catalog of upgrades. But couldn’t they do that and give the creators credit too? Morally, yes. Legally, trying to win a dance movement copyright case is not an easy step.

“The question is whether a court would say that those few seconds of a dance routine are enough to be a choreographic work protected by copyright,” says Seltzer. “I don’t want copyright being used to block the creative reuse of dance. But when used for profit, ethically speaking, it would be good to see the creator share the profit. There should be an obligation to credit.

Epic Games changed the names of these dances to the “Fortnite” emotes, erasing the origins.

Snoop Dogg’s signature choreography in the “Drop It Like It’s Hot” video is the “Tidy” emote.

BlocBoy JB’s Shoot Dance, introduced in 2017 and one of this year’s most popular dances, is renamed “Hype” on “Fortnite”. And Epic recreated 2 Milly’s “Milly Rock”, a 2015 dance-based hit song, and called it “Swipe It.”

Much like Disney’s 2013 attempt to brand “Día de los Muertos,” the name of a Mexican holiday, and the successful Kiswahili phrase “Hakuna Matata” is a cultural theft, so do emotes “Fortnite” sells are pieces of our culture – steps we practiced with our friends and moves we associate with songs, artists and magical moments in pop history.

Can we share and appreciate the cultures of others? Yes. But there is a line that is crossed when credit is erased and profits are made. The exploitation is real.

“Fortnite” is not the only offender. We see it in fashion, in the way Shudu Gram, the virtual black model of a white man, is used to gain influence. We see on social media how white women go ‘fishing for the black’ – using makeup, self-tanner, and enhancements to make black, crisp offerings appear for that audience.

We see it in a lot of the Kardashian stuff, where they get credit and compensation for the things black women have done long before them. We saw it with Nicki Minaj’s “Chun-Li” and Gwen Stefani’s “Harajuku Girls”. And appropriation debates around Awkwafina’s “blaccent” in the role of Peik-Lin in “Crazy Rich Asians” and Coldplay and “Hymn for the Weekend” inspired by Beyoncé’s India.

“It is not acceptable to steal culture. At some point, we need to recognize the ways in which capitalism supports and sustains the mistreatment of people. If we want to go any way towards racial conciliation, ethnic conciliation, we have to respect the culture, ”said Mason-Campbell. “If you sell culture, it costs money. It is intellectual property. We don’t call it “The Carlton Dance” for nothing.

Unfortunately, it is not uncommon to love the culture and not the people.

Jeneé Osterheldt can be contacted at [email protected] and on Twitter @sincerelyjenee.