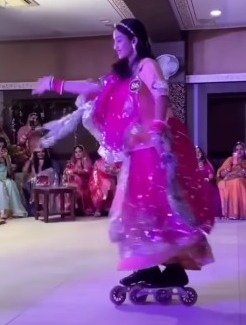 Talent has no limit and in the internet world, it doesn’t take long for a real artist to win hearts. This time around, it is a young girl from Rajasthan whose folk dance performance has blown Internet users away. What is extraordinary about her traditional Rajasthani dance are her shoes. Yes, we see her dancing on inline skates.

In the video, Krishna Kanwar Gahlot is dressed in a traditional Rajasthani lehenga and heavy jewelry, as she skates and dances at a cultural event held in Udaipur. As soon as the organizer, Twinkle Baisa shared the video on social media, in no time the performance was shared by multiple handles on Instagram and Twitter.

Krishna’s performance wowed viewers and there is appreciation from all corners for the talented girl.

According to the video caption, Krishna is a professional skater who has won many national and international titles. The national level skater also traveled from Udaipur to Delhi to pay tribute to the Indian military and raise awareness about the girls’ education campaign. Her act was recognized by the Indian military and she even met Prime Minister Narendra Modi for her efforts.