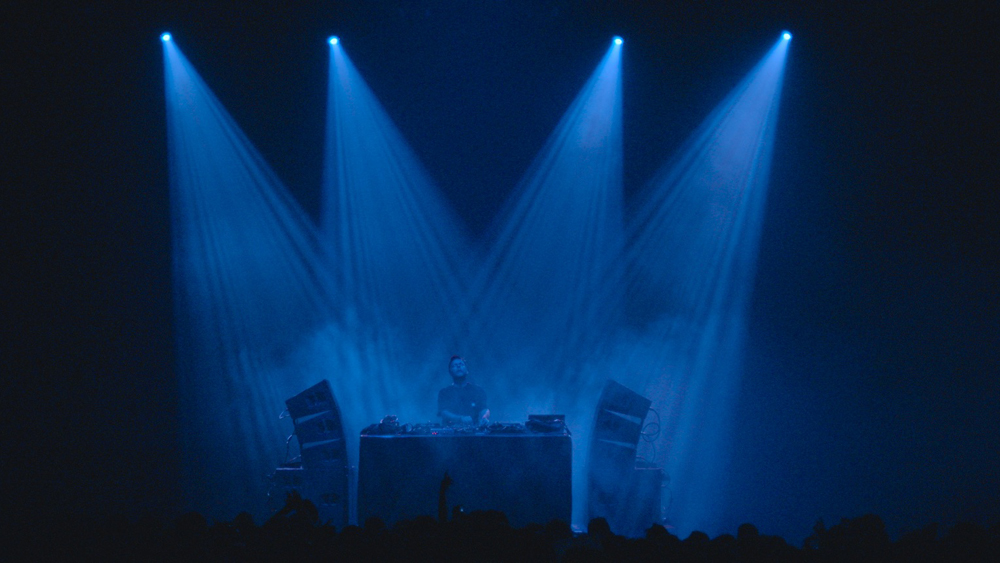 Gabin Rivoire’s documentary “Laurent Garnier: Off the Record”, which explores the origins and development of techno music through the eyes of one of its pioneers, will have its world premiere on May 7 in front of an audience in direct to CPH: DOX festival in Copenhagen. Anton, who manages global sales, released his first official trailer exclusively for Variety. Garnier, one of the world’s greatest DJs and respected music producer, chats with Variety from his home in France, which is still blocked, preventing him from going to the premiere, on the evolution of the film, his love of techno and how the pandemic caused him to stop listening to techno music for the first time in over 30 years.

Garnier had been approached a few times by people wishing to make a documentary on his life, but wanted to “open the doors and work in confidence” with a filmmaker, he explains. â€œLaurent Garnier: Off the Recordâ€ is in a way the fruit of a collaboration between Garnier and Rivoire, initiated by the DJ, even if he emphasizes that it is told from the director’s point of view, not his own.

The two men met nine years ago when Rivoire made a film about YEAH !, a music festival in the south of France that Garnier co-organizes. Rivoire knew very little about techno, Garnier says, but the DJ liked his approach of capturing music on film in a “very detached way”, which Garnier calls “beautiful poetry”.

â€œIt’s very difficult to film the passion,â€ he says. â€œAnd when I saw Gabin’s work, I thought he was going to be able to bring it. Because passion is the only thing that, from a young age, has driven me to do what I do. I am very passionate about music and very serious about it.

After a few years of collaboration, Garnier offers them to join forces on a documentary project. So, over the next year and a half, Rivoire followed Garnier as he toured the world as a DJ at concerts.

In 2003, Garnier had published a book “Electrochoc”, “telling the history of house and techno, in connection with my history, but going quite far in the disco [as well as earlier forms of dance music], says Garnier. A French production company wanted to produce a fictional film based on the book, but after several years of development the project was unsuccessful. About three years ago, when the French narrative film producer passed on the idea for a separate documentary, Garnier handed the two projects over to London-based producer Julien Loeffler of Featuristic Films (“Knuckledust”, “Say Your Prayers â€,â€œ The Sonata â€), which came on board, but on condition that the documentary be the first. The film is produced in association with Agent Double.

When Garnier embarked on his 2018/2019 world tour, Rivoire traveled with him, performing in front of 15,000 people at Barcelona’s SÃ³nar festival, Bassiani, a tech hotspot in Tbilisi, Republic of Georgia, and in crowded clubs from Tokyo. Rivoire also filmed interviews with other pioneers of dance music, such as Carl Cox, Pedro Winter, Seth Troxler, Jeff Mills and Derrick May.

In the film, touring footage and interviews are interspersed with archival footage that offers a throwback to the late 1980s, when the techno scene was emerging in Detroit and England, at clubs like the Hacienda. from Manchester, where Garnier started his DJ journey, then Rex, a club in Paris, where Garnier moved next door. The film also includes the political and judicial response to rave culture, which in some countries has faced police brutality. There has been a hostile reception to techno in France, for example, where it has been seen as a “threat,” says Garnier. “We are not where we are today without a fight.” Finally, the film takes us to 2017, when Garnier celebrated the 30th anniversary of his first appearance as a resident DJ at the Rex, and when he received the Legion of Honor medal from the French politician. Jack Lang. Garnier’s views on events and music are superimposed on archival footage.

Speaking of his relationship with Rivoire, Garnier said he was “extremely happy” with the way they worked together and with the documentary resulting from this collaboration. â€œWe have really become very close. We spent about four years on the road together. And then when he started editing the documentary, he really involved me in the process, which I found very interesting.

â€œAnd I’m very happy now with the result, because we have my story, but inside of that we have Gabin’s style. We have everything I love about what he does in a longer movie than he’s ever done for us before. Like every project that I do, I get very, very involved in it, because I do things with my heart, and we’ve tried to do some good things.

There were two things he insisted on with Rivoire when the director was writing the screenplay. These were, â€œWe have to feel the passion. We have to understand that it is about the community. It’s about sharing things, because I’m not an artist who works alone.

The power of the tech community was manifested after the film’s producers launched a Kickstarter crowdfunding campaign in France, which provided a third of the film’s budget.

The shutdown was hard on everyone but particularly hard to bear for Garnier, after 30 years on the road with his music. It was “extremely unsettling,” he says. â€œI missed seeing people, sharing things with people. But, on the bright side, it also heightened his awareness of what his life as a DJ has brought him. â€œIt’s my fuel. You know, this is what I need. I don’t do drugs. I don’t drink a lot. But the dose of adrenaline I get and the pleasure I get from sharing music with people is extremely strong, â€he says.

â€œI always said and really thought this – that’s not bullshit – that I was a very lucky guy. Because I experienced an incredible musical revolution. Techno for me was the essence of everything I loved, â€he says, citing his love for a multitude of musical genres – including jazz, disco, soul, reggae and New Wave – and la techno seemed to embrace all of these disparate influences. He also feels lucky that his career has lasted so long, and he can still draw massive crowds to his concerts.

However, given his love of techno, there was a surprising side effect of the pandemic for the DJ on the first stop. â€œFor six months – for the first time in 30 years – I couldn’t listen to techno anymore. Because for me, techno has always been the music that looked to the future. It’s always been very futuristic music; always looking forward, â€he says. â€œWhen it all stopped – because we had no idea where it was all going – for the first time in my life, I kind of had a wall in front of me. And techno wasn’t. more topical, and I quit listening to techno. Instead, he listened to a lot of old French songs, funk, soul and a lot of psychedelic. “I actually produced a album with a psychedelic group during the first confinement, â€he said.

Now, with the vaccine rolling out and with some people telling him about concert dates in a few months or so, he’s back to techno. â€œNow that we have a light at the end of the tunnel, I was able to re-embrace techno and listen to techno again. It’s very strange, but it was almost a physical thing, â€he says.

This experience is in line with his vision of the art of DJing. â€œMusic has always been about what works for the environment, when and where. As a DJ, I’ve always said you have to play the right record at the right time. You can do anything when you’re a DJ, but not anytime. You have to read at the right time to play anything. You can play records at five in the morning, whereas if you had played them three hours before, you would have been killed, â€he says.

“And that’s what’s interesting about DJing – it’s finding the right time when you can hit people hard and they can come home and remember the night because of the records you’ve played at that. moment, because it has become magical. “

Garnier says that when he starts DJing again, for the first few months, there will be songs he won’t play. He compares it to the choice of films he wants to see when cinemas in France reopen. “You know what? I would like to dream a little. And I would like to laugh a little. And I would like to hope. If they are planning something really darkâ€¦ shit, I won’t come. Because I haven’t. need that, “he said.” And I think musically it’ll be the same. I get tons of promos and guys doing really hard techno, I just don’t get it right now, because for me, it does not correspond at all to the time.

He adds: “So, you know, maybe my first concerts, I could be influenced by my mood and how I feel, and I think I’ll be so happy to be able to share music again.”