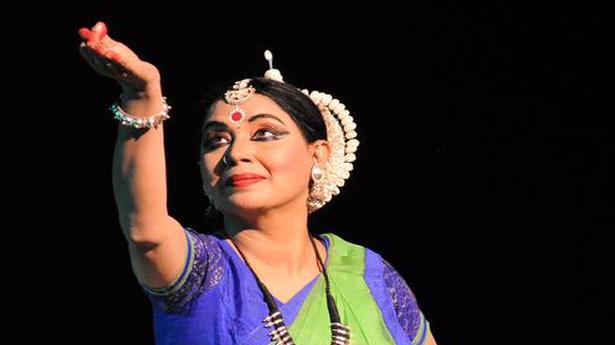 Mahagami Gurukul’s Kathak students led by Guru Parwati Dutta presented ‘Iti.’ â€œIt’s an attempt to revisit Kathak traditions in the light of modern aesthetics,â€ Parwati Dutta explained. â€œNamah Shivayaâ€, a â€œstuti-paranâ€ praising the shrines of Shiva and Jyotirlinga, one of which is in Aurangabad, where Mahagami is located, was the opening play. â€œDevi,â€ a poetic tribute by Tulsidas to Raag Shree and Chautaal, was an attempt to â€œpresent the dhrupad-pakhawaj idiom. Taal Vasant in Nine Matras explored the beauty of Vasant, articulated in ‘Ovi’ (a poetic meter in Marathi poems) by Sant Dnyaneshwar.

Shiva Vasant of Tulsidas in dhrupad format set on Taal Sool depicts Shiva as nature and Parvati as the Vasant ritual. The cosmic dancer is struck by Cupid’s arrow and nature turns into spring. The images of Shiva’s lotus feet, the agility of a tiger, the movements of a graceful swan and a majestic elephant were well visualized.

Two dhrupads from Tansen, the first to Raag Soha addressed ‘Dilli-pati’, the emperor of Delhi whose court is decorated for sabha music.

The second to Raag Gurjari Todi, was addressed both to the royal patron and to God.

“The presentations, a confluence of Hinduism and Islam, are an attempt to revive the old ‘chaal’ and ‘gat’ as ‘ibaadat-ki-gat’ and ‘dua-ki-gat’ from the Mughal period and the ‘tribhangi sthaanak’ of Natwari nritya, “Parwati informed. The anarkali costume created a Mughal darbar vibe while for Natwari the dancers wore lehenga cholis.

‘Raas Panchadhyayi’ by Shrimad Bhagavata Mahapurana, was a living story. In “Badariya barase”, Parwati portrayed a young girl delighted to see the silvery trail in the sky. The melodious music and the complex rhythmic pieces were delightful. Tansen’s ‘Prabal Dal Saaj’ conjured up images of the monsoon. Raindrops provide happiness and sustenance; the narration shifts to Govardhan Leela when Krishna saves the lives of the villagers.

Padhant, an utterance of mnemonic syllables, was energetic. In the finale, “Jai Govind”, Parwati moved from cover to cover, reciting and dancing with ease. Parwati is known as a thoughtful dancer and this was evident in her choice of pieces, technical virtuosity, and eye-catching costumes. With graceful and expressive movements, she and her followers move in and out, sharing the space with precision.

Aruna Mohanty and Orissa Dance Company presented ‘Jatra’ a panoramic journey of the art form spanning over 2,000 years, its resurgence from the Jagannath Temple to the stage through storytelling, slides and symbolic imagery.

In a large canvas, the genesis of managalacharan, pallavi, sthayi, abhinaya and moksha, the superstructure of Odissi springing from the substructure of allied and popular art forms, Mahari, Gotipua and Sakhi nata have been explored.

The patriotic opening number â€œBharat Dharaniâ€ with a narration of Odisha as a land of timeless beauty and grace, had slide shows of the Indian flag. Mangalacharan detailed the procession of the Lord in the rath. The young boys dancing the gotipua pallavi, swinging on top of each other without weakening in rhythm, stole the show.

In ‘Ya Devi’ on Shakti, the divine ambiance was evoked by the dancer. Four dancers demonstrated the colorfully covered boat. Two boys moved into synchronized sitting positions to represent the rath yatra. The opulence of the procession with one dancer holding the magnificent decorative headgear known as Tahiya from behind and the other dancing as a god, gave it a ceremonial feel. Inspired by Chhau, Sambalpur and Geetinatya (musical theater), all of which enriched the sequences. Positions such as chauka and tribhangi, linear hand movements, all rendered gracefully were delicious.

The final piece ‘Samsara’ was the story of a soul’s journey from childhood to old age. The choreography presented the guru’s compositional experience. The beautiful images conveyed the joyful and artistic spirit of Odisha.

‘Meera, the Soul Divine’ was directed by senior Bharatanatyam artist Chitra Visweswaran and his followers. Beginning in a flashback mode, where Meera remembers his journey from his marriage as a child, he moved on to significant incidents in his life.

The sublime love for Krishna playfully sown in the child’s psyche by his mother, and Meera’s resulting focus on Krishna’s idol even as his mother dresses him as a bride, have been well described by Shruthe Raammohan . The groom comes on a horse, and the toran, doli, and wedding paraphernalia were set by a group of dancers (Bharatanatyam) dressed in vibrant Rajasthani dress.

The second segment was clearly described by Uma Nambudiripad Sathyanarayana emphasizing Meera’s unique devotion. Nandini Ganesan empathized as a friend of Meera and as a Radhe dancing with Krishna. ‘Jhoolat Radha’ was a joyful performance while Kalinga nartana was full of energy. Chitra Visweswaran was in his element in the abhinaya oriented segment which featured familiar bhajans such as “Pag ghungroo”, “Aisi lagi lagan” and “Baso mere”. His expressions reflected the nine rasas well.

Bombay Jayashri’s efficient use of lights and musical setting had an impact. The team managed to strike a chord with viewers. The dancers’ final entry, reaffirming the glory of Krishna and Krishnabhakti, was interesting and deviated from the usual format of the guru calling them on stage for the encore. (To be continued )