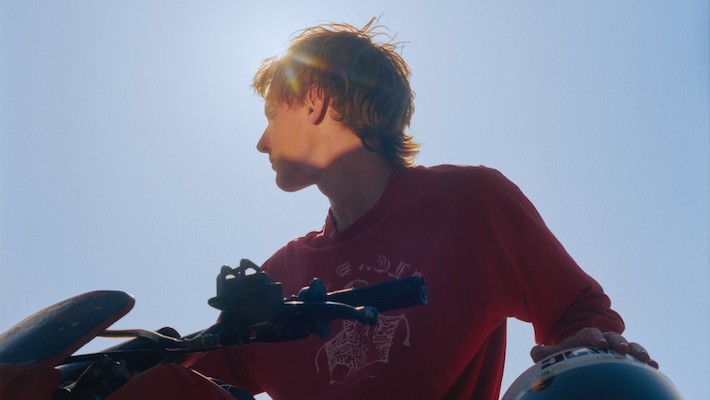 On the opening track of his second album Harp, Los Angeles native Chris Adams, who makes music under the name PENDANT, sings about his own death. He meets the idea with ambivalence rather than fear before the song crumbles into a frenetic, house-like drop of rhythm. Much of the album reflects a similar structure; Adams shares veiled musings on mortality, grief, and loss masked by hard-hitting electronic pop, fuzzy shoegaze, and dark post-punk-inspired beats.

Sometimes kinetic and twisted, the eclectic album is the result of nearly a decade of painful emotional reflections and healing triggered by the death of his father. But much like how grief is experienced, the feeling isn’t immediately apparent in Adam’s music. Instead, it floats beneath the surface, present but never the immediate focus of the 13-track version.

Celebrate the release of his album Harpnow available via Saddle Creek, Adams looks back on his touring memories, shares inspirational advice and practices his plumbing skills on the latest Indie Mixtape 20 Q&A.

What four words would you use to describe your music?

Dance music for the mentally ill.

It’s 2050 and the world isn’t over and people are still listening to your music. How would you like to be remembered?

Well, in 2050, I will be around 60 years old. I will probably continue to make music one way or another. I hope people can still extract something emotional from my music. But I’ll probably be more focused on what I’m doing at that time. If someone listened to my music and thought “man, this guy can write a chorus”, I’d say that’s about all one could ask for in terms of a legacy or something.

What is your favorite city in the world to perform?

I gave a few concerts in Tokyo many years ago in a different band. It was part of this Japanese tour we were doing – it’s some of the most special live experiences I’ve ever had. I was sick for most of the trip but everything was still so mind blowing and exciting. The whole trip felt electric.

Who is the person who has most inspired your work, and why?

The first thing that comes to mind is Jason Dill. He said something in an interview that became very valuable to me. Not a direct quote, but it was something like… doing something great requires two things: burgeoning narcissism and overwhelming self-doubt.

Where did you eat the best meal of your life?

Which album do you know every word from?

What was the best concert you ever attended?

I saw Prince in 2013 in San Francisco at a little club (where Prince can play) called DNA Lounge. Just a few years before his death. The whole stage was lined with pedals. He ran across the stage and pressed a delay pedal. Then run to the other side and hit a distortion pedal. Every second of this show was so amazing.

What is the best outfit to perform and why?

My go-to direct fit right now is a pair of battered Carhartts, a skin-tight cycling jersey, and a pair of black Air Forces. Comfortable and chaotic.

Correll B on Twitter is a national treasure. He’s been doing his thing for so long and has never (to my knowledge) turned his followers into a brand deal or a money grab. He is so pure. He loves music and dancing with such a beautiful passion.

What’s your most played song in the van on tour?

I haven’t been on tour for many years, but for a while it was Lil B’s ‘I Love You’. It was a great way to defuse interpersonal issues and some of the stresses of being on tour . This immediately put us in a good mood. It’s so healthy. The video is great too. Lil B is crying in a snake shop.

What’s the last thing you looked up on Google?

Which album makes the perfect gift?

Everything must pass by George Harrison. I don’t think anyone can’t enjoy at least half of the songs on this record.

This middle-aged guy invited us to stay at his mother’s once. She wasn’t there and when we arrived he was dead drunk on the sofa. We walked in and looked through a bunch of his old stuff – baby pictures of him and all those artifacts from his childhood. We ended up leaving before he woke up. We knew all these intimate details of his life and he didn’t even know we were there.

What is the story of your first tattoo or your favorite tattoo?

i have the album logo Harp tattooed on my arm. It’s been my favorite since I got it. My friend who designed the logo ended up tattooing it for me. He’s such a special artist and I felt so lucky to have him involved in the creation of the album. Cry out, peace upon the sun.

Which artists prevent you from changing channels on the radio?

I don’t listen to the radio often but the first time I listened to KROQ in LA (my mom wouldn’t let me listen because they played songs with swear words) I was 8 years old and I took my mother’s car keys and slipped into her car to turn on the radio. I wanted to hear Linkin Park or Blink-182 or something but ended up hearing “Intergalactic” by the Beastie Boys. I think this experience totally rewired my brain. I felt like a different person after that.

What’s the nicest thing someone has ever done for you?

My best friend/manager Nik is one of a kind. He believes in me in a way that I can’t fully understand. He’s a big reason why I do what I do now. I owe him so much.

What advice would you give to your 18 year old?

You deserve kindness and love. Don’t try to convince yourself otherwise.

What’s the last show you went to?

I saw DIIV play at the Lodge Room in LA. I love this group.

What movie can’t you resist watching when it’s on TV?

Speed with Keanu Reeves and Sandra Bullock. They are both so hot in this movie. And the plot is so silly but so entertaining. Dennis Hopper is the villain. It’s just an undeniable action movie from the 90s.

What is one of your hidden talents?

I don’t know if it’s necessarily a talent. I feel like in another life I would have been a plumber. I feel a deep satisfaction in unclogging the pipes. I fashioned a wire coat hanger into a hook to remove all the blockage from a sink/tub. I got pretty good at it.

Harp came out now via Saddle Creek. Get it here.