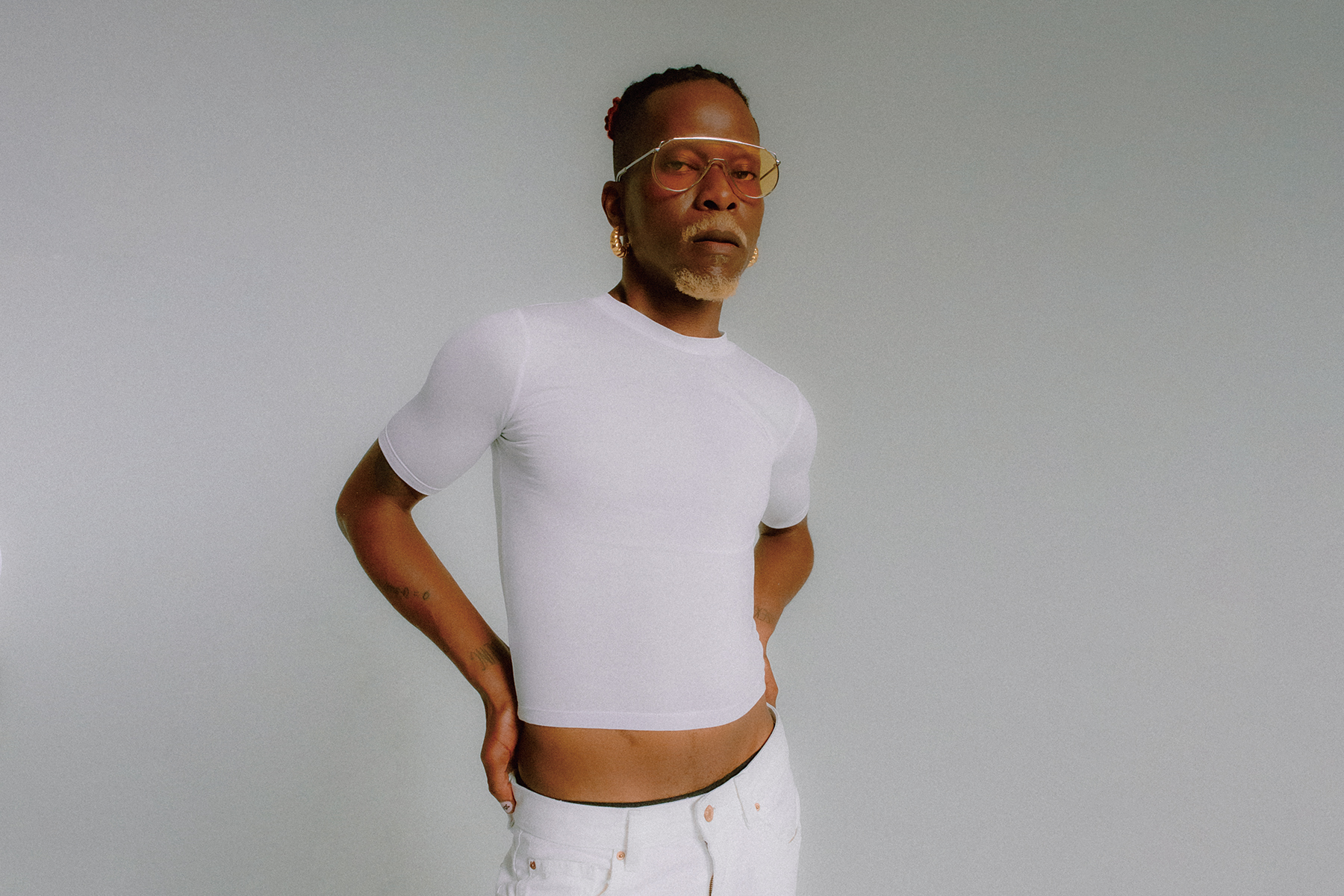 With this look to the future, the 36-year-old singer, songwriter, DJ, actor and style-maker simultaneously shrinks the world and expands it. With his new album, José Luis and the paradox of love, Kwenders connects collaborators from musical hotspots as far afield as Kinshasa, Paris, Lisbon, Santiago de Chile, Brooklyn, New Orleans and Seattle. His songs fuse African musical styles from decades and countries with the R&B sensualism of the moment, a mellow jazz vibe and a dancefloor driven groove. Her lyrics, sung in five different languages, expose her fears and flaws while celebrating her multi-faceted humanity. It is a fluid, immersive work, vast but coherent, elusive of genre, border or trend. And it speaks for the potential for anyone – and perhaps everyone – to embody a more open and enlightened way of living.

Kwenders was born José Louis Modabi in Kinshasa, the capital of the Democratic Republic of Congo. As a child, he absorbed the country’s dominant musical style, a generations-long transoceanic conversation between Africa and Cuba known as Congolese rumba. After following his mother to Montreal at the age of 16, he had his first glimpse of the stage with the Chorale Afrika Intshiyetu, a Congolese Catholic vocal ensemble. Like many young Montrealers in the 2000s, Kwenders was also drawn to the city’s colorful pop music scene, particularly focusing on hip-hop and electronic music. The latter in particular, with its celebratory inclusion and unbridled physicality, opened up her imagination.

Still, Kwenders felt indebted to the unwavering expectations of professionalism common to many immigrant families. He therefore attended university to pursue studies in accounting and became a tax collector for Revenu Québec. For several years, he lived like José Luis Modabi by day, Pierre Kwenders by night, borrowing his stage name from a grandfather and dividing his time between family responsibilities and personal ambition. As difficult as that period was, it proved that his drive for self-expression was unquenchable. In art, he found a way to project the playful and provocative beliefs he felt within.

In 2014 Kwenders released their first full album, The Last Bantu Emperor, Where The Last Bantu Emperor. Its title, which Kwenders intended to send listeners googling the complex, centuries-old history of pre-colonial African peoples, was as much a statement of intent as the luscious synthesized soul music it contained.

“I grew up in Africa, and in school there, we were taught a lot of things about the Western world – things I didn’t really need to know, but I’m glad to know. I want people to feel the same knowing the real things about my culture,” he says. “And if I’m able to share a bit or educate through my music, that’s the best gift.”

That same year, Kwenders started their own monthly party called Moonshine. With no address listed to access its lineup of eclectic dance music, intrepid revelers had to text for a secret location, an under-the-radar ploy the event still applies when it pops up in towns from London to Los Angeles .

A tour with a band took Kwenders across Canada; traveling as a DJ took him around the world. Playing in both contexts, he built sets to bring listeners together and put them in a state of shared joy. He moved freely between African musical styles – Congolese rumba, ndombolo and soukous, as well as the immensely popular Ivory Coast sound known as coupé-décalé, or “rob and run” – each s accompanying distinct dance styles. Performance is storytelling, he says, and he strives to provide an intimate and empowering experience for himself and his audience.

“Part of the reason I became a DJ was to showcase this music,” he says. “It has always been important for me to create this bridge between African sounds and all the other sounds that I keep discovering, especially in electronic music.”

This curatorial impulse fully materialized in his 2017 album MAKANDA at the end of space, the beginning of time. The recording process took Kwenders to Seattle, where he worked first with producer Tendai Maraire, then half of experimental hip-hop duo Shabazz Palaces and guitarist Hussein Kalonji. (Maraire and Kalonji are both American-born sons of famous African musicians.) With his upbeat saxophones, meandering song structures, and lyrical nods to the power of love, metaphysics, and Henry Miller’s Erotic Literature, MAKANDA was a comprehensive rendering of Kwenders’ musical vision. It received rave reviews and was shortlisted for the prestigious Canadian Polaris Music Prize.

José Luis and the paradox of love go further. It’s bolder, more evocative, more sensual, more fun. It opens boldly with “LES (Liberte, Egalite, Sagacite),” a ten-minute club banger clearly aimed at DJs. Additional intrigue comes from the song’s guest vocalist and keyboardist, Win Butler and Regine Chassagne of Arcade Fire. Kwenders met the fellow Montrealers at a benefit party for Chassagne’s Haiti-based nonprofit organization years ago, and they’ve been supporting his music ever since. He and Maraire took the original 30-minute cut of “LES,” co-produced by Maraire and pioneering DJ and college instructor King Britt, to Butler’s studio in New Orleans for an improv session where the pair brought their contribution.

The rest of the album is an equally intoxicating whirlwind of textures and rhythms. Kalonji is back with Maraire, touring with an international cast of collaborators: Portuguese producer Branko, Chilean producer CarloMarco, Haitian producer Michael Brun, French singer anaiis, New York beatmaker Uproot Andy, and many more. all drawn into Kwenders’ orbit via his ravenous ear and Moonshine affiliation. By digging into the lyrics, which Kwenders sings in French (the official language of the DRC and Montreal), in English, in Lingala, in Tshiluba and in Kikongo, we discover a rich text of reference to musical styles and African luminaries, a mind-blowing set of hyperlinked sounds. Paradox presents Kwenders as a global ambassador for self-determination, pointing the way to a more evolved era – a time when solidarity is built on the dance floor and multiple stories can co-exist within a single enigmatic individual.

“There is no more identity battle,” says Kwenders. “Pierre and José Luis are the same person. I thought I was really with MAKANDA, but finding myself was one thing. Then I had to talk a bit about myself. In this album, the story that is told is that of José Luis. This is not Peter’s story. He laughs and adds, “I think Pierre’s story is still being made.”

On Paradox, this story finds Kwenders settling long-running internal disputes. Her mother’s voice registers the approval and pride of the song “Your Dream”. (She cried when she heard it, he says.) And in the song “Religion Désir,” her love for the church choir of her youth clashes with her current “strange relationship” with the church. Capital-C.

“It’s a fight between religion and desire,” he says. “I tell a story about this kid who goes to church and maybe sings in a choir and maybe finds himself fluid or gay, but being in a church, he can’t be himself. .. There is nothing wrong with churches, and it is good to gather in one place and have a spiritual life,” he continues. “But the things that we experience in church when we are children – the things we learn about ourselves, the church tells us cannot be right. We learned a lot of things that may be questionable.

Perhaps as a gesture of reconciliation, the closer album “Church (Likambo)” features vocals from Chorale Afrika Intshiyetu – the very choir he sang with as a child. In Kwenders’ Dream World, music is as much a bridge to common ground as it is a channel for radical self-expression.

The two are inextricable for Kwenders, even in the visual aspect of Paradox. The album’s artwork and press photos depict him in a rainbow array of fashion and facial hair arrangements, befitting an artist who is both extremely inventive and meticulous about his image. The video for “Kilimanjaro” goes further, digitally transforming Kwenders’ face onto the bodies of iconic black artists from across the decades as they perform in vintage music videos: Jimi Hendrix, James Brown, Fela Kuti, Miriam Makeba, Grace Jones. The effect is a flashing visualization of Kwenders’ protean personality. But it also reflects a powerful will towards a new form of total creative freedom.

“I think I’m all, you know? I want to express the same joy these people expressed when they were on stage, on screen, when they were dancing,” says Kwenders. “And yes, when people look at me, I am a man, but there is a lot of femininity in me. That’s why I say I am all that. There is no limit to who I am, and I don’t think I will ever limit myself to expressing myself in any way.