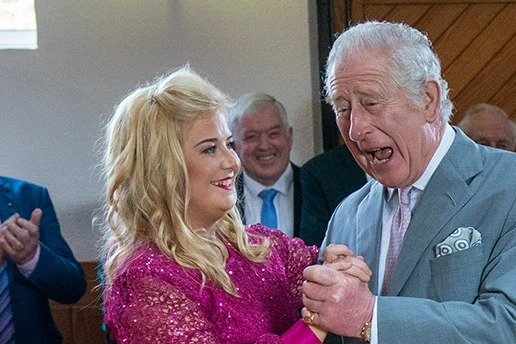 PRINCE Charles became Lord of the Dance yesterday as he and Camilla joined expert performers in a lively Irish jig.

The future king, 73, and his wife, 74, held hands with experts as they took traditional dance lessons.

Camilla laughed and struggled to follow, but the Prince of Wales was hailed as a ‘total natural’ by his teachers.

Onlookers cheered when the music stopped – and the pair were invited back for ‘more practice’.

Charles, who had previously dabbled in an Irish hand drum – a bodhran – joked that he needed “vigorous physical training and a lot more Guinness” to become proficient.

The couple were guests at the Brú Ború Cultural Center in Cashel, Co Tipperary, Ireland.

It was the place where the tragic teacher Ashling Murphy, 23, played the accordion.

She was murdered while jogging in January and Charles and Camilla met her parents Kathleen and Raymond privately to offer their condolences.

The Prince of Wales then paid tribute to Ashling who he said was ‘taken from us far too soon’.

A 31-year-old man has been charged with murder and is awaiting trial.