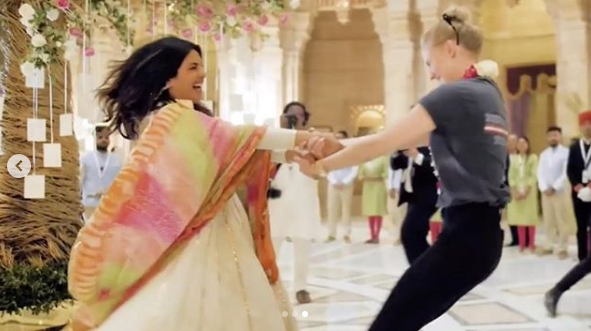 Priyanka Chopra and Nick Jonas got married in an idyllic ceremony at Umaid Bhavan Royal Palace in Jodhpur, Rajasthan and have since blown us away with their gorgeous wedding looks. Priyanka hosted a reception after her wedding in Delhi and Prime Minister Narendra Modi attended the ceremony. Nick and Priyanka gave the exclusive rights to an international magazine which shared photos and videos of the event. In the latest photos shared by the company that shot wedding photos and videos, PC is seen enjoying their pre-wedding celebrations with their bridesmaids and family. Sophie Turner has witnessed the history of PC and Nick since day one and has become PC’s closest friend since she started dating Nick. She was one of 12 bridesmaids that Priyanka had and in a photo shared online, PC and Sophie are seen doing “Fugdi,” a folk dance performed by women at festivals across India.

It is endearing to see how Nick’s family accepted Indian culture and actually reveled in it. PC and Nick both had separate Hindu and Christian wedding ceremonies to respect each other’s religion and the result was mind blowing! It was a beautiful melting pot and PC has never been happier than this! Look at the photos and you’ll know we’re not lying.

Priyanka will resume work on her film The sky is Pink and will take a short Christmas break to be with her new husband Nick!