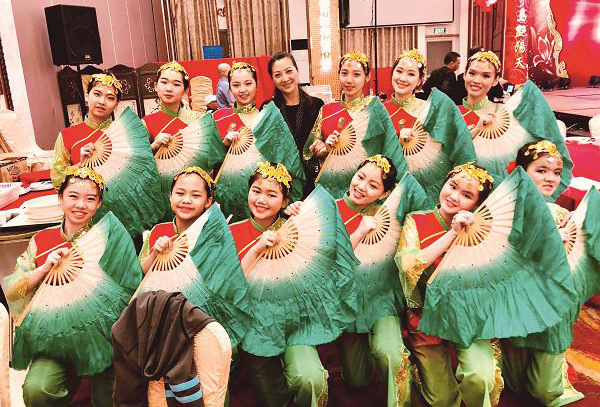 â€œArt has no borders. Although China and the Philippines have different cultures and national conditions, the people of the two countries can communicate directly with each other through art,â€ he says. Through its unremitting efforts over the past decades, Chinese folk dance has revealed its dazzling charm in the Philippines, known as a country of 1,000 islands.

â€œCultural exchanges are the most direct way for the people of two countries to get to know each other better. I believe that a better mutual understanding, deeper friendship and cultural resonance between the Chinese and Filipino people will help the two countries to reap more fruits of a win-win cooperation, “He said.

He, originally from Xiamen, in the province of Fujian (south-eastern China), was a dancer with the Xiamen Song and Dance Troupe before moving to the Philippines.

â€œWhen my husband and I first arrived in Manila (the capital of the Philippines), we discovered that there were a lot of people of Chinese descent living there. But we could hardly feel the atmosphere of Chinese culture, let alone Chinese music and dance, â€he recalls. .

When some teachers at a Chinese language school in Manila invited him to participate in the creation of a Chinese folk dance troupe, he readily agreed.

Due to his professional teaching skills and his efforts to promote Chinese folk dance, more and more schools and organizations in Manila began to invite him to teach Chinese folk dance. She was also artistic director of several dance troupes.

Creation of an art center

In a spacious gym in Manila’s Chinatown, more than 100 girls gather every weekend to study Chinese folk dance with He. This piece is in the Dance Art Center established by He in 2013. Some of the students are Chinese and some are Filipino girls.

The center has been recognized by the community. Students are often invited to give performances – at least 20 times a year – on various occasions. â€œI like to chat with Filipino dancers when I attend local activities. They teach me traditional Filipino dance and I teach them Chinese folk dance. We make friends through dancing, â€he says.

“It is not easy to operate the art center. We run into difficulties almost every day. When we were at the most difficult time, we had to buy fans and handkerchiefs (used in dance performances) in China. But I never thought of giving up, “he says.

She insists on communicating with her students in Mandarin. â€œBy teaching children Chinese folk dances, we not only teach them how to appreciate and express beauty, we also build a bridge for them to know and understand China,â€ she said.

â€œFor example, the dance of the Uighur ethnic group is passionate and joyful. When they learn Uyghur dance, I tell them that the Xinjiang Uyghur Autonomous Region in northwest China is famous for its delicious grapes. When children learn the dances of the Dai ethnic group, they learn that the peacock is a symbol of good luck for the Dai people. I hope the children will know more about the ethnic culture of China and have a better understanding of the geography, history and culture of China, â€she adds.

In order to better promote cultural exchanges between the two countries, he has led student groups to visit China in recent years.

In 2018, he organized a group of descendants of overseas Chinese in the Philippines to visit Fujian Province, which provided a good opportunity for children to learn more about China’s intangible cultural heritage and the Chinese culture.

The following year, she organized a summer camp, during which overseas Chinese children visited Hui’an, a county in Fujian Province, to experience the unique folk culture of Hui’an.

When the world was hit by the COVID-19 pandemic in 2020, it organized children to attend an online summer camp sponsored by the All-China Federation of Chinese Returning from Overseas. Children enhanced their understanding of Chinese culture through various online activities.

â€œWe have always been concerned about our homeland. Last year, when China was at its most difficult time, we donated anti-pandemic supplies to China, to help our compatriots as much as we could. Our center and other organizations in the Philippines, also recorded a video to encourage China and Wuhan. China’s effective prevention and control of the virus has brought hope to the world. We believe that the new coronavirus will be eliminated, â€he said.

Photos provided by He Peilan