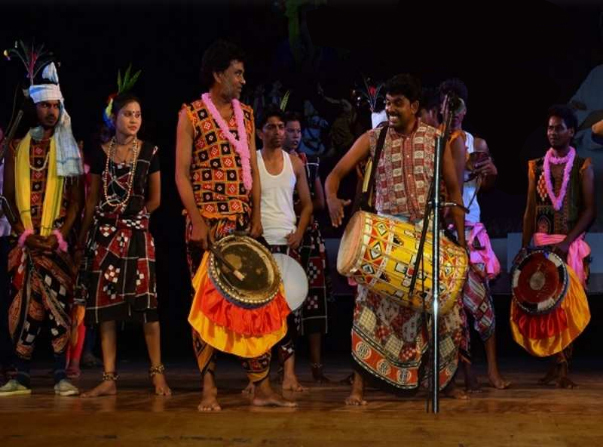 Jamtikra: Traditions evolve over the years and are passed down to posterity over time through a process of socialization. However, we have left behind the traditional folk dance form â€œNachniyanâ€ of Western Odisha, in our march towards modernity.

According to reports, the Nachniyan folk dance was traditionally performed on auspicious occasions such as weddings, thread ceremonies, social functions, cultural programs and religious festivals.

In the ‘Nachniyan’ folk dance form, the performers dance to the beat of musical instruments like Dhol, Nisan, Tasha and Mahuri, while singing Chaupadis and other folk songs, according to the report.

Two to four artists usually participate in this group dance and one person recites while others rehearse the folk songs. Fascinated by the captivating performance, local villagers gather to enjoy it. The leader of the Nachniyan troupe who recites is called Siri Gayak and the other members who rehearse his songs are called Palia.

The style of clothing worn by Nachniyan artists is also typical. Usually they wear colorful clothes with multiple pleats around the waist, loose Kurtas specially designed and decorated with works of Jaree, Pagdis on the head dotted with peacock feathers.

These entertainers put Kundals on their ears, Bahutis on their hands, Malas around their necks, Ghungurs on their legs and rings on their fingers. Their faces are decorated with Sindur and Chandan, the feet of ‘Alta’ and the eyes of Kajal. They hold Chamar in the left hand and a handkerchief on the right, performing several times.

However, this traditional folk dance form has become obsolete these days and people prefer loud music from DJs, played and performed by bands instead. The Attabira region of Bargarh district in western Odisha was very popular in the region for Nachniyan dancers.

Notably, this traditional folk dance form has faded from society here over the past three to four decades. The artists who performed on demand, for marginal remuneration, turned to other trades to earn a living.

Although it is commonly accepted that traditions have a connection with ancient history, many traditions have been invented by human societies on purpose, whether social, political, economic or cultural.